The Battery Pack in your Electric Vehicle – Why and How?

EV Battery Packs provide an excellent alternative to fossil fuels and are environment-friendly too. No wonder, they have become essential in many applications. The widest use of battery packs has been in the Electric Vehicle (EV) industry which is projected to bring in a paradigm shift in the way we travel.

What is a Battery Pack?

Much of the research on and evolution of the technology that drives battery cells is based on the elements that go into making one such cell.

According to the International Energy Agency, electric car sales grew by 65% in 2018, and are surging ahead to reach 23 million units in 2030.

The cell works by separating the lithium ions and electrons from a lithium-metal oxide through an electrolyte during discharge and charge. The commonly used cathode material in a typical cell is made up of Lithium Cobalt, Lithium Manganese Oxide, Lithium Nickel Manganese Cobalt, Lithium Iron Phosphate among others, while the anode is made up of Graphite or Lithium Titanate.

According to the new report from the United Nations Conference on Trade and Development (UNCTAD), the demand for raw materials for electric car batteries is set to rise further. The market for cathode for the most common lithium-ion battery was estimated to reach $58.8 billion in 2024 from $7 billion in 2018. Chile contributes to nearly 58% of Lithium reserves, Democratic Republic of Congo to 50% of Cobalt reserves, China, Brazil and Turkey to 80% of natural Graphite reserves, Australia, Brazil, South Africa and Ukraine to 75% of Manganese reserves. The report has suggested investing in green technologies that depend less on critical battery raw materials.

Until recently, the predominant elements used in EV battery packs were Lithium/Cobalt, but technological advances are finding use for other elements as well such as Lithium/Ferrous Phosphate and Lithium/Titanate to match the growth of the EV market.

Many competing technologies for the composition of a battery cell exist today which need to be understood before knowing how an EV Battery Pack is constructed. The common technologies used are described in https://batteryuniversity.com/article/bu-205-types-of-lithium-ion

Lithium Ferrous Phosphate Battery Cells – They produce 3.2V, a current of 90-120Wh/kg with a charging capacity of 1C with a life cycle of 2000 cycles.

Lithium Titanate Battery Cells – They produce 2.4V nominal, a current of 50-80Wh/kg with a charging capacity of 1C and a life cycle of 3000-7000 cycles, these are gaining more acceptance today. 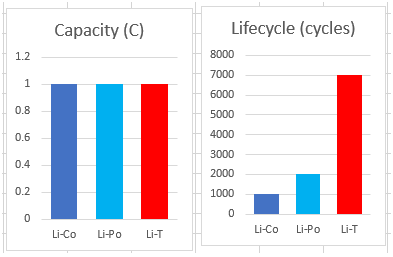 Understanding a cell and the construction of a Battery Pack

A Battery Pack is composed of a number of cells arranged in parallel for total voltage rating, and in series for total current rating, of the pack.

A number of cell holders, based on the number of cells in the battery pack, are arranged in an array of rows and columns for voltage connection in parallel and current connection in series. Two such arrays are placed on the top and bottom of the cells arranged by polarity – this provides stability to the battery pack structure to be able to endure vibration when the EV is driven.

H-type Nickel strips are spot welded on the top and bottom of the array formed with the cells to provide connectivity between the cells, earmarking one column each for the positive and negative terminals. The Battery Management System (BMS) is connected to the array in accordance with the

positive or negative terminals, assigning one wiring for the output of the battery pack and one to charge it.

The actual Battery Pack inside the body frame of an EV, along with other components will have additional paddings to sustain 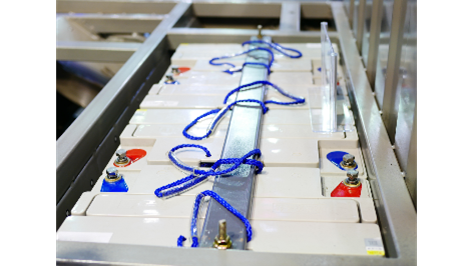 any rough ride. The battery pack design varies according to the OEM and its capacity.