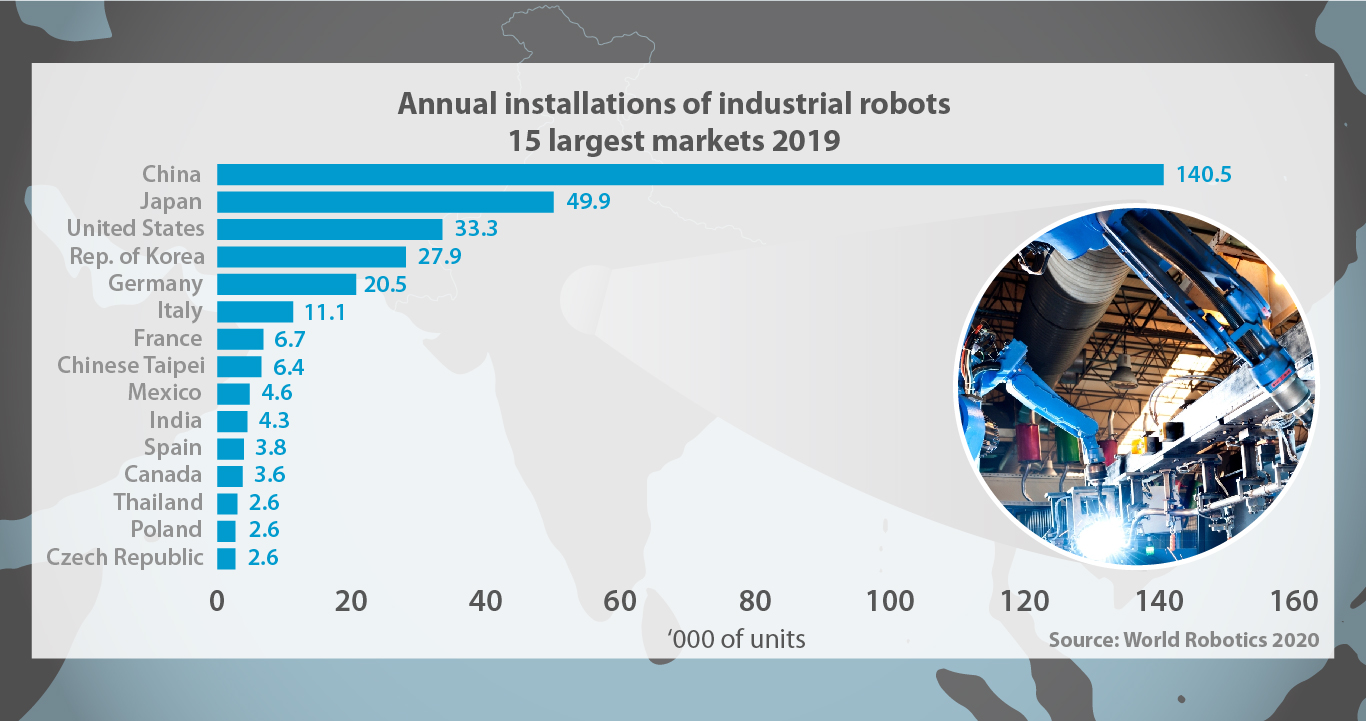 The Indian industry has grown by leaps and bounds since the economy was opened for foreign investment in the early 90s. Irrespective of the government of the day, the industrialisation policy has remained a constant. The states of India are competing with each other in a healthy investment ecosystem. In the last decade of industrialisation in India, robotics has played a key role. While adoption of robotics started in the automobile and electronics sectors, advances in robot technologies such as mobility, vision systems, grippers, connectivity and ease-of-programming have resulted in increased robot adoption in other sectors as well.

India, as a global manufacturing hub

What started with the automobile sector with almost all the major brands setting up manufacturing plants in India has now engulfed the entire industrial spectrum. The electronics manufacturing industry has established itself strongly in India with major home appliance and smartphone brands vying with each other to set up shop in India with the current Government’s Make-in-India drive. With the Government’s thrust on infrastructure development, industries in this domain have shown tremendous growth.

The very large and burgeoning Indian population with an ever-increasing purchasing power has led to a very high demand generation to sustain the increased supply from the rapid industrialisation. Quick availability of cheap labour coupled with the increase in education levels of the Indian population is another factor that is drawing more investment into India.

Against this backdrop of an increasingly industrialised India, products manufactured in India are finding a better value in the international market. Brands are able to sell their products at a competitive price globally. The internet has also turned the entire world into a huge marketplace for any company in the world today. This needs better manufacturing practices to compete at the global level. Increasing efficiency, reducing wastage, putting manpower to better use such as innovation and improving safety levels have all become major considerations of the industry today.

It is but natural for all industries in India to look at ways and means to sustain and grow in today’s global arena. Robotics is playing a key role in the Indian industry to help it grow in volume and value. The automobile industry has adopted robotics on a large scale with almost all manufacturing lines in any unit in India adopting it. The electronics industry has embraced robotics in a big way too, with all brands having factories in India achieving greater profitability through the adoption of robotics. With the rapid industrialisation of India, industries across domains are adopting robotics in a big way.

The present regime has been speeding up the promotion of robotics and is adopting robotics in a big way, such as the indigenously developed ‘Daksha’ which is an automated mobile platform for multi-purpose payloads used by the Indian Army primarily for handling Improvised Explosive Devices (IEDs), ‘Mitra’ which is an indigenously built humanoid robot while ‘Manav’ which is India’s first 3D-printed humanoid robot used in research.

The National Institution for Transforming India (NITI) Aayog, formed by a Union Cabinet resolution on January 1, 2015, is the premier policy ‘Think Tank’ of the Government of India, providing both directional and policy inputs. It signed a statement of intent with ABB to collaborate in the fields of Robotics and AI. The Defence Research and Development Organisation (DRDO) signed many contract agreements with academia for developing technologies related to robotics and AI. The All India Council for Robotics and Automation (AICRA) was formed in 2014 with a vision to make India a global leader in the field of Robotics, IOT and Artificial Intelligence.

According to the International Federation of Robotics (IFR), while the global annual industrial robot installation figures increased by 11% between 2014 and 2019, in India 4,771 new industrial robots were installed in 2018, increasing by a record 39 percent over the 3,412 units in 2017 which in turn rose by 30 per cent over the 2,627 units installed in 2016. India stood eleventh worldwide in terms of annual installations in 2018. Between 2012 and 2017 India saw a Compound Annual Sales Growth Rate (CAGR) of 18 percent.

The automotive industry accounted for 44% of total installations in India in 2018, while the general industry comprising of rubber and plastics, metal and the electrical/electronics industry grew by 28% and robotics in non-automotive manufacturing is fast catching up with the automotive sector, which presents a promising picture indeed (the growth of robotics in the general industry was an impressive 46% in 2017). Although the average robot density (the number of robots per 10,000 workers) in India is less than the global average, the higher growth rate should reflect in gradual improvement in robot density.

Although the COVID-19 pandemic has severely impacted sales and manufacturing in India, like elsewhere globally, the Indian economy has started looking up with the GDP turning positive again in this quarter compared to the downturn in the earlier 2 quarters. Subsequently, the outlook for robotisation has reason for cheer.