In countries across the world, green energy policies, grid stability requirements, and renewable energy and energy storage technologies are set to develop vigorously in the coming decade. According to Bloomberg New Energy Finance (BNEF), the world’s cumulative energy storage capacity will peak at 358 GW/1,028 GWh by the end of 2030, more than 20 times the capacity and power generation available at the end of 2020. Most progress is being made in energy storage devices for residential, industrial and commercial environments. BNEF forecasts that in ten years, these storage devices will account for a quarter of the world’s total energy storage capacity. While currently Germany and Japan are the development hotspots, the research company expects more globalized development in the future.

The capacity of most residential energy storage systems falls within 10kW, with the main components being solar panels, hybrid PV inverters and storage batteries. The general structure is shown in the figure below. Among them, the hybrid PV inverter plays a key role in energy conversion. After the power is collected by the solar panel and stored in the battery, it is allocated according to the supply and demand of the power grid and power terminals. The excess power stored through energy recovery can also be fed back to the power grid, maximizing energy efficiency. 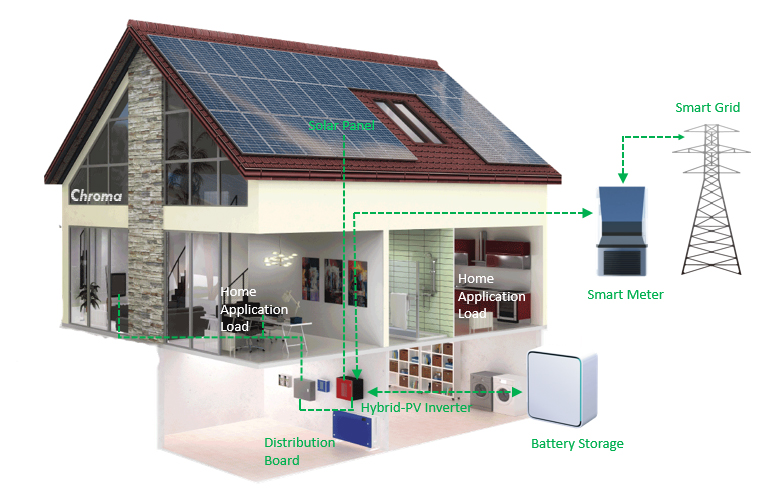 Since hybrid PV inverters have grid-connection functionality, testers need to be able to set voltage and frequency in the R&D and production process, as well as simulate AC power grid abnormalities. With regard to testing the power input of grid-connection functionalities, hybrid PV inverters can be used as a voltage source to provide power to household appliances, so the AC load also needs to simulate various impedance characteristics to test the power stability.

Chroma 61815 Regenerative Grid Simulator has four-quadrant output capability, which has been adopted by various leading energy storage equipment manufacturers since this product was launched, allowing us to quickly accumulate a lot of experience in hybrid inverter testing. With its energy recovery functionality, Chroma 61815 can greatly save power used in power grid simulation tests when acting as an AC power source, and with the List, Pulse, Step and other advanced programming functions, it can simulate a variety of power grid abnormalities, providing accurate and reliable AC input testing.

The optional regenerative AC load function allows Chroma 61815 to act as an AC load, which not only feeds the consumed power back to the grid to save energy, but also simulates various types of load characteristics through CC, CR, CP basic load modes, Rectified and Lead/Lag specific load modes, Half-Wave load mode, and the Stand-By real-time response function. It can also perform a dynamic loading test by using the Auto Run function in the Softpanel or by executing commands from the Chroma 8000 system. Chroma 61815 thus delivers a standalone, cost-effective energy storage test solution for AC source and AC load testing of hybrid PV inverters. 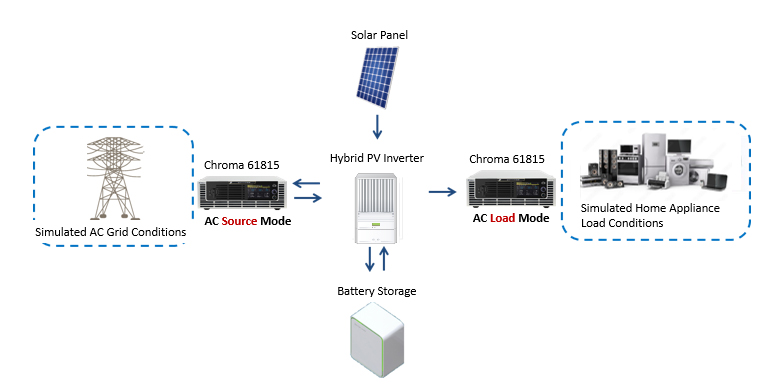